What Is Trisodium Phosphate in Cereal? 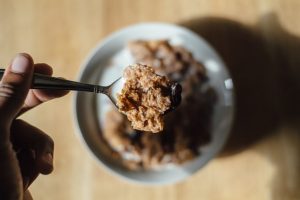 Are you worried about the cereal that you eat every morning may contain harmful substances like paint thinner?

Trisodium phosphate (TSP) is a white and grainy powder that is highly soluble in water. The moment you add this chemical compound to water it forms an alkaline solution. This is why it is used in cereal–it acts as an acidity regulator and subdues the acidic nature of ingredients used in the preparation of cereal. Freshly cooked cereal is hard and has some astringency to it.

The above-mentioned property of Trisodium phosphate (TSP) also changes the natural color of cereal (which is dusty brown) and makes it appear golden yellow. Moreover, it also makes cereal a bit more crunchy–which is preferred by most of the customers of major cereal manufactures and the crunchiness also helps the cereal move swiftly through the extruder (during the packaging phase).

According to the Code of Federal Regulations, Title 21, Volume 3, by the Food and Drug Administration (FDA or USFDA), “Sodium Phosphate is generally recognized as safe when used in accordance with good manufacturing practice“. FDA recognized this compound as a Multiple Purpose GRAS Food Substance.

Consuming Trisodium Phosphate (TSP) based products won’t do any harm to your health unless you surpass the recommended consumption limit or have a specific health condition where your body reacts to this compound differently than it does in a perfectly healthy person. So, even if you have been having a bowl of cereal every morning since childhood, there is nothing to worry about.

What Is the Recommended Amount of Trisodium Phosphate (TSP) One Can Consume Before It Gets Dangerous for Health?

The two compounds are easily utilized by your body to carry out processes like DNA replication and many more. The remaining unutilized electrolytes are excreted out along with urine. This is generally not a problem but if the recommended limit of Sodium Phosphate is exceeded, the salt may get deposited in your kidneys–leading to an excruciatingly painful condition known as “kidney stone”.

Who Should Avoid Consuming Products with Trisodium Phosphate (TSP) as an Ingredient?

Consumption of Trisodium Phosphate (TSP) can be detrimental to the health of an individual with persistent kidney problems. Note that phosphorus alone creates diseases, but it gets deposited in the kidney aggravating the condition even further.

In healthy people, the phosphorus present in TSP can be used to aid physiological functions in the body. But for an individual with recurring kidney ailment, serum phosphorus can make the condition even worse. According to a study by Kidney Health Research Institute, Pennsylvania, it can even lead to death.

Constipation, being a common and easily treatable ailment, most people prefer to buy over-the-counter drugs like methylcellulose (Citrucel) and psyllium hydrophilic mucilloid (Metamucil). Which is fine if you occasionally or rarely suffer from digestive problems (like most healthy people do).

But if your problem is chronic and your pop over-the-counter pills (of the fluid-based drug) more than once or twice a month, you need to stop right now, cause you might be ingesting too much phosphorus.

A study conducted by the University of Alabama had 10 healthy individuals consume normal food for a week and then eat foods with 1000 mg of phosphorus (which is quite high). After performing tests at the end of each week (during the experiment) they found that phosphorus to be harmful to bone health in humans.

What Are the Other Applications of Trisodium Phosphate (TSP)?

1) Used in Soaps and Detergents

Trisodium Phosphate (TSP) makes a very good ingredient on soaps used to clean grease and oils off of utensils, machinery, or clothes. 1 percent solution of TSP is highly alkaline and hence is used as the main ingredient in the making of soaps and detergents. However, usage of TSP as a soap is on a decline since the last few decades.

2) Used as a Food Additive

Being highly alkaline in nature, Trisodium Phosphate (TSP) is also used as an acidity regulator in processed foods. Moreover, it is also a great thickening agent. This is why it is added to cereal.

Moreover, TSP is also approved by the FDA as safe for consumption, so there is no reason for processed food manufacturing companies to not make the most of this inorganic compound.

The phosphate compounds present in TSP are used in performance-enhancing drugs by endurance athletes, bodybuilders and fitness enthusiasts. An article published in the Journal of Science and Medicine in Sport states that consumption of phosphate-based supplements can increase the oxygen uptake by 6–12 percent.

After reading an article about cereal containing chemical compounds like paint thinner, the natural instinct of a regular cereal eater will be to panic and start worrying. But there is no need to worry. As mentioned in one of the sections above, FDA recognizes Trisodium Phosphate (also known as paint thinner) as safe when consumed within the recommended limits.

Also Read- What to Eat After Wisdom Teeth Removal