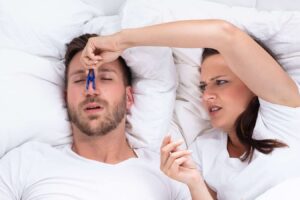 How to Silence Sleep Apnea 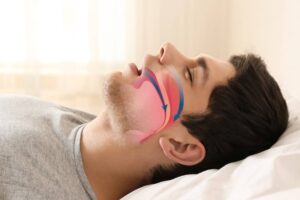 Sleep apnea is the temporary interruption of breathing while someone is sleeping, while obstructive sleep apnea is sleep apnea severe enough to wake a person up. Obstructive sleep apnea is a common sleep disorder that occurs in nearly one-third of men and nearly one-tenth of women. However, according to Simpli Dental, sleep apnea can affect people of all ages, including babies, children, people over the age of 50, and those who are overweight. Obstructive sleep apnea occurs when the muscles in the back of your throat relax too much to allow normal breathing. When these muscles relax, your airway constricts, and your breathing is hampered. If this constriction is bad enough, the body wakes itself up to prevent asphyxiation. These brief moments of waking up can result in an audible snorting, choking, or gasping sound. This pattern can repeat itself several times per hour, all night long. This can prevent your body from reaching the deep, restful phases of sleep, and cause insomnia, morning headaches, irritability, difficulty paying attention, increased heart rate and blood pressure, as well as bedwetting in children. Because these moments can be brief, people with milder forms of sleep apnea may not even be aware they suffer […]