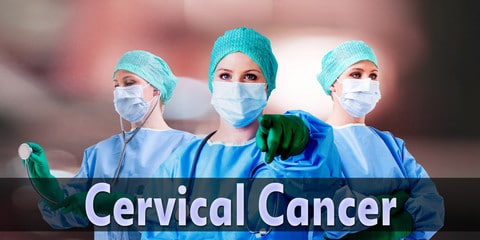 Cervical cancer is a kind of deadly disease in which abnormal cells grow in the tissues of the cervix. The cervix is the lower and narrow part of the womb where it joins with the top part of the vagina. Cervical cancer is disastrous; it remains a powerful killer even when it is within our reach to prevent it.

The signs of this disease may not be so obvious but you have to look out for these signs. These signs can be similar to sexually transmitted infections which is why you should visit your doctor.

The presence of highly developed cancer cells will bring about:

Cancer arises as a result of the development of uncontrolled abnormal cells. A large amount of human cells have a fixed lifespan and new cells are created to replace them when they die. Abnormal cells now occur when these old cells do not die but instead continue dividing which brings about increase in cells which at the long run forms a lump, relatively called a tumor.

There are factors that increase the chances of a woman developing a cervical cancer and they are:

There are about a hundred kind of HPV but about thirteen of them can lead to cervical cancer. In some cases, the human immune system can clear the virus which as a result, most women do not realize they have contracted this virus and do not suffer health consequences from it. Studies now depict that human papilloma virus can be transmitted from the mother in utero to the child.

Women are frequently infected with this virus in their adolescence, 20’s or 30’s despite the fact that the disease can take up to twenty years after the infection before the development of the disease commences.

Diagnosing cervical cancer earlier is the best and it can be diagnosed by the following:

Treating cervical cancer will largely depend on the extent to which the cancerous cells have developed and access to qualified and experienced surgeons. The treatments for most stages include:

For cancerous cells that have spread beyond the cervix, a procedure called Exenteration will be carried out which involves the removal of the womb, vagina, rectum, lower colon or bladder.

Cervical cancer can be prevented through:

However, educating women about cervical cancer will only increase the possibility of them going for screening as it is not as effective as inviting them for one.

Cervical cancer is real and deadly, it is essential we don’t joke with screenings.

Akinyemi Mujeeb is a Prolific health blogger from Nigeria. He owns Commonphobias where he currently blogs about all types of phobia and how to cure them