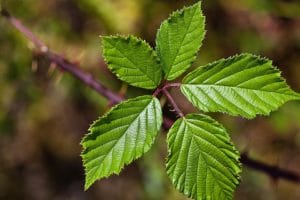 You must already be familiar with the fact that fresh blackberries make a delicious and healthy snack. They are rapidly becoming popular among health enthusiasts.

Blackberries are a rich source of Vitamin C and K, which makes them the best pre-workout snack. But it’s leaves have equal therapeutic value and can be used as a medicinal herb to treat a variety of diseases.

It is mainly consumed as a tea or in the form of a capsule. Some people prefer to consume it by soaking freshly cut Blackberry leaves in water. The antioxidants get extracted into the water and which makes a rejuvenating health drink.

Here are the Top 10 Health Benefits of Blackberry leaves.

Everyone knows how horrible it is to wake up in the morning with a sour throat. An infection in the throat also causes other parts of your body to hurt; especially muscles.

To heal quickly from a sore throat, it is vital to drink fluids that kill bacteria. Lemon juice also does a great job of killing bacteria but drinking it can be a nightmare as it the citrus in it can cause your throat to burn.

A Dutch study concluded that intake of foods rich in flavonoids can help you live a longer and healthier life. They wanted to know whether flavonoid intake affects the mortality rate.

Ulcers are painful and it can take a while before it can heal by itself without any treatment. Thanks to anti-bacterial and anti-inflammatory properties of blackberry leaves, you don’t have to ingest anti-bacterial creams anymore.

An Italian study concluded that the antioxidants present in blackberry leaves can kill microbes containing H. pylori strain. To prove this they used antioxidants from a plant called Rosaceae.

Measured portions of this plant were given to subjects from the rural areas who were suffering from a disease called Helicobacter pylori. The subjects carrying  H. pylori strain G21 CagA(-) strain showed excellent recovery from the infection.

Diarrhea is one of the most horrible conditions out there. It makes you weak, dehydrated and immobile. Most people prefer to take pain killers and other medications to treat diarrhea as they are fast-acting and are available over-the-counter in the drug stores.

But a cup of warm tea prepared from Blackberry leaves can be equally effective against the microbes creating havoc in your stomach. Add one teaspoon of dried blackberry leaves in a cup of hot water and consume it once every 30 minutes.

The antioxidants present in the Blackberry leaves kill the growth of free radicals and boost immunity. Cold and Flu are a result of viral infection. If your condition is not very severe or you are in an initial stage of a Flu, consider having a cup of warm Blackberry tea to stop cold and Flu dead in the tracks.

A Hemorrhoid is one of those conditions that can severely impact how you live your life. They are swollen veins in your lower rectum. Internal Hemorrhoids are painless but equally fatal as external Hemorrhoids. It is recommended to apply a liquid paste of Blackberry leaves around the affected area to get maximum relief within a short time.

The University of California had performed a remarkable study on how consumption of(leaves of) six popular berries can cure colon cancer. Blackberry leaf was one of them.

Cancer surgeons call cancer cell death by a medical term called “apoptosis”. Consumption of blackberry leaves triggers this process of apoptosis in humans. Apoptosis of colon cancer cells can lead to a faster recovery from such a deadly disease.

If you are wondering what apoptosis is?

It is the death of a cell in the human body due to natural causes like blebbing, cell shrinkage, nuclear fragmentation, chromatin condensation, etc. Some people also call it “cellular suicide”.

Premature aging is a major issue in the United States and this is what is driving people to get their face fixed by cosmetic surgery. Such surgeries cost a lot of money and can cause complications.

Why risk your life when you can look younger by consuming food that contains Matrix metalloproteinases (MMPs) which are known to have anti-aging properties. MMPs are present in Blackberry leaves and a study published by the Internation Journal of Cosmetic Science proved that consumption of Blackberry leaves can reduce the formation of wrinkles.

Gum inflammation is a result of bad oral hygiene and the formation of plaque on the surface of teeth. When plaque settles down on the teeth for a long period, the bacteria in it grow stronger and infect your gums. This can cause redness, swelling and a lot of pain.

Blackberry leaves have antimicrobial and anti-inflammatory properties which makes it the best all-natural remedy for gum diseases. Add a teaspoon of dried Blackberry leaves to boiling water and let it simmer for a few minutes.  After it’s done, you can filter it and drink it like tea.

Blackberry leaves contain a form of astringent known as Tannin. Tannin can cause malabsorption of proteins. So, don’t consume Blackberry leaves immediately-after or just-before having protein supplements extracted from Whey or Pea.

Other than that, there are no side-effects of Blackberry leaves and it can also be consumed every day.