Is Brown Discharge the same as a period? 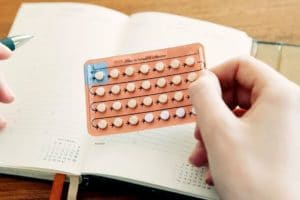 What is brown discharge in women?

Seeing brown discharge on your underwear or while wiping can be scary and make you worried. The first time it happens, you might get scared or think if it’s a sign that there is something wrong. But, relax, brown discharge is just old blood coming out. Fresh blood is bright red in color. Blood gets darker in color after it spends a long time outside the blood vessels. When blood comes into contact with air, it undergoes oxidation and the color of blood gets darker. The hemoglobin and iron ( Fe ) in the blood when interacts with air, the blood takes a brownish color.

In most cases, brown discharge is normal. It can be a sign of many things, from the implantation of an embryo to an impending period. Nevertheless, there are some warning signs and symptoms that a female should keep in mind when it comes to vaginal discharge. And if you’re worried about experiencing abnormal vaginal discharge, it is time to get an appointment with a gynecologist.

Why is there brown discharge?

There are various reasons why you could be having brown vaginal discharge on your underwear. The reasons behind brown discharge range from absolutely normal to serious cause for concern. That is why every female need to be aware of all the symptoms that can cause abnormal brown discharge. Some of the common reasons why the discharge is brown include:

Is brown discharge the same as a period?

Although it is rare, some females also can experience very light brown discharge during their ovulation time. After the mature egg bursts out from the ovary, it can lead to a small amount of bleeding and even cause minor abdominal pain. Females who take contraceptives also experience brown discharge instead of a period on birth control. Hormonal birth control can cause the uterine lining (inner lining of the Uterus ) to become thinner, which can ultimately cause brown discharge or no period at all.

Brown discharge can also be a sign of implantation bleeding. This can also occur once the fertilized egg attaches the uterine lining. That can cause a small amount of bleeding.

Can infections cause brown discharge?

If you’re having foul-smelling or itchy brown discharge or any other abnormal symptoms, it’s time to go to the gynecologist. Such conditions require medical attention and should not be avoided.  Early diagnosis can prevent complications and help treat the condition while its time.

All you need to do is get in touch with us and book yourself an appointment with the best gynecologists in town! Intimate health should not be avoided and make sure you do not avoid the symptoms that are not normal.