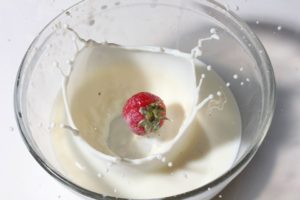 Heavy cream is the fat that rises to the top of the boiled milk. This cream is thick, heavy, and 95% percent is fat. The rest is sugar. Although, heavy cream or heavy whipped cream has only 7.5 calories per tablespoon, when consumed in large quantities regularly can lead to cardiovascular disease in the future. No animal-based product with so much fat content can be healthy in the long run.

Here are the 8 Best substitutes for Heavy Cream

Evaporated milk is unsweetened condensed milk with 60 percent of its water content removed by the process of heating, homogenization, canning, and heat-sterilization. There is a lot of mystery surrounding this substitute for heavy cream. The mystery is due to the fact that every country has its own definition of “Evaporated Milk”. People seem to be using this form of milk in several recipes.

In the United States, Evaporated milk is added to tea, coffee, and latte. It can also be used as dressings for salads, burgers, and sandwiches. Compared to regular whipped heavy cream, it just contains 6.5 percent of fat. Hence, you can use it as a healthier and tastier substitute for heavy cream. Besides, canned and unsweetened evaporated milk lasts for more than 15 months.

Cashew cream is one of the best dairy-free dips for lactose-intolerant people. Plus, it also contains a lot fewer unhealthy fats than regular heavy cream. Cashew cream is also a lot of thicker and creamier than heavy cream. Fine-grained cashew cream has a smooth texture and unmatchable consistency. To make cashew cream, soak 2 cups of raw cashew overnight, next morning blend it with some salt till the mixture becomes fluid and succulent.

For the last few years, there is a myth being passed on that the phytoestrogen present in soy unbalances men’s hormones and makes them develop feminine qualities. As absurd as it sounds, a report by Livestrong dismisses this myth by quoting a few studies performed by experts.

A study by the German Medical Science did not find any link between phytoestrogen and the dominant male hormone Testosterone. So, if you have any qualms about consuming Soy products, rest assured, it won’t harm you.

Soy milk cream is one of the best substitutes for heavy cream. It is plant-based milk made by grinding and boiling Soybeans. To prepare Soy milk-based dipping sauce, you can add some agave syrup and apple cider vinegar to it.

Greek yogurt or also known as strained yogurt is made by straining the curd to remove whey from it. It is much thicker in consistency than unstrained yogurt. It has a tangy, tart and sour taste. This is what makes it one of the best toppings for chili, soups and pasta sauce. To enrich it even further, add some extra virgin olive oil to it.

Full-fat coconut cream can be used instead of refined oil or heavy cream in cooking. It is vastly used in South East Asia and some parts of South America. It is the only animal-free product that carries the richness, girth, and taste of regular cream. Plus, it is not as expensive as some other items listed in this post.

You can buy canned full-fat coconut cream from your nearest grocery store or make it in your home. To prepare Full-fat coconut cream at home, buy a couple of coconuts from the grocery store, remove the meat off of them and blend it with water until it becomes creamy. That’s it. You can use it immediately or store it in a freezer for months on end.

Corn has been a part of the classic American diet for ages. Almost every fast food item sold has corn in some form or the other. It is healthy, non-addictive, and adds a unique flavor to anything you add it to. This is why cornstarch is one of the best substitutes for heavy cream. Particularly, for vegans.

Corn starch is extracted from the salutary part(the endosperm of the kernel) of corn grain. You can easily buy it from a grocery store. It is usually available in powdered form. Corn starch is a thickening agent. You can add it to soups, appetizers, juices, or custard to increase its consistency and overall taste.

A study by Princeton University proves that excess consumption of high fructose corn syrup leads to weight gain. So, make sure you consume it in moderation.

Pureeing tofu is a process that makes it go back to its original soy milk form. As you would already know tofu is made by boiling soybeans, extracting milk out of it and then crystalizing it until it reaches a semi-solid state. When you puree 1-2 cups of tofu, you get the same soy milk but with a toasty flavor to it. It might look similar to mashed potatoes but to make it more palatable, you can add flavor to.

Cream cheese is a lot different than regular cheese. It is extracted freshly from milk and cream. According to the FDA, cream cheese manufactured in the US should not contain more than 30% milkfat. This is what makes cream cheese one of the best alternatives to heavy cream. People usually use it as a dressing for salads or sandwiches. It’s sour and tangy flavor makes it an excellent dip for potato chips.

You can either buy cream cheese from a store or prepare it in your home. Store-bought cream cheese will have stabilizers such as carob bean gum and carrageenan added to it. This is why it is recommended to prepare it at home.

To get started, boil a liter of milk along with some white vinegar. Vinegar will make the milk solids separate from the water. After a while, take out the milk solids into a piece of filter cloth. Squeeze to remove all excess water from the milk solids. You will be left with pure cream cheese ready for consumption. No artificial flavors needed.